The Trucking Industry Has Been In The Spotlight This Month, But How Has That Affected The Spot Market?

The Trucking Industry Has Been In The Spotlight This Month, But How Has That Affected The Spot Market?

The number of loads is literally off the charts. We have had to physically adjust our reporting charts to accommodate for the current reality, though the supply of trucks to move those loads is the focus of recent headlines.

“Combining the current truck shortage with the huge surge in loads only compounds the capacity constraints. Truck-to-load ratios are even lower than the record low capacity crunch that temporarily ensued following the Electronic Logging Device (ELD) mandate in the US close to 5 years ago. ” says Claudia Milicevic, president of Loadlink Technologies.

January’s Canadian spot market saw recent events only exacerbate long-term trends in the movement of freight both within Canada and cross-border.

Truckloads shipping across the border from Canada to the United States, soared 281 percent from this time last year. Equipment postings were down 28 percent year-over-year.

Freight activity within Canada remained at strong levels. Since January of last year loads within Canada swelled 166 percent. Equipment postings were up year-over-year by 11 percent. 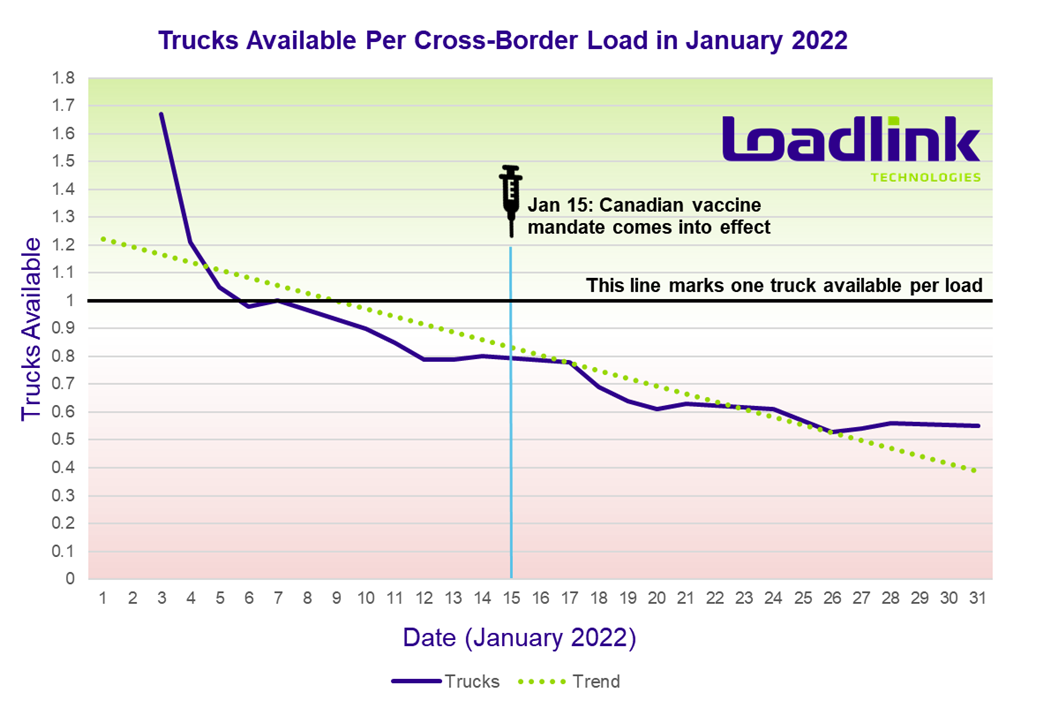 The truck-to-load ratio fell below one truck for every one load posted on Loadlink, following the downward trajectory we’ve seen over the past three months. The ratio for January was 0.93 available trucks for every load posted, down 23 percent from 1.21 in December. Year-over-year, January’s truck- to-load ratio was 64 percent lower compared to a ratio of 2.57 in January 2021.

An interesting example illustrating the concerns around capacity shortage is Reefer (refrigerated truck) availability in Canada, as Reefers move perishable goods across borders. From January 1st-16th from the hundreds of thousands of postings and trucks on Loadlink, the truck to load ratio was 0.90.

From January 17th -31st the available number of Reefer trucks fell, while posted loads increased, bringing the ratio to 0.57, a decrease of 36%.