2021 Presented Many Challenges – But a Lack of Loads Was Not One of Them.

2021 Presented Many Challenges – But a Lack of Loads Was Not One of Them.

Loads, loads, and more loads for December as daily volumes continued to increase, closing out the year with record highs.

“The festive frenzy did not escape the freight industry as demand was stronger than we’ve ever seen this past December,” says Claudia Milicevic, president of Loadlink Technologies.

December’s Canadian spot market saw significant surges in the movement of freight both within Canada and cross-border.

Month-over-month, loads from Canada to the United States were up 6 percent compared to November 2021, while year-over-year, outbound loads soared 171 percent. Equipment postings were down twelve percent year-over-year and down seventeen percent from November.

Freight activity within Canada remained at healthy levels. Month-over-month, loads within Canada heated up 9 percent, while year-over-year, the increase swelled 125 percent over December 2020. Equipment postings were down fifteen percent from November, and up year-over-year by five percent. 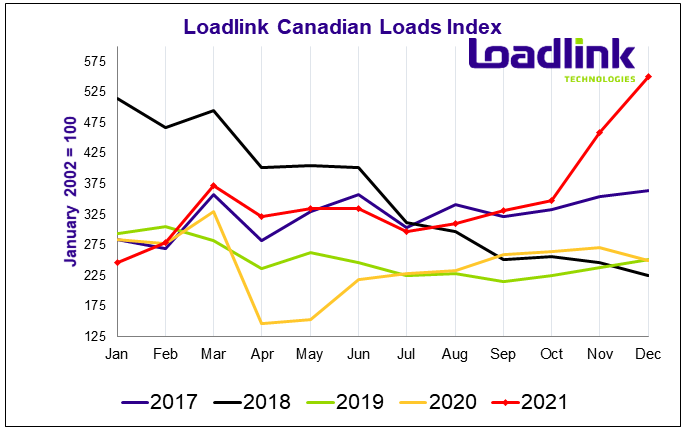 Freight Index data provides insight into Canada’s economy at large and is a primary resource for the trucking community. The Freight Index accurately measures trends in the truckload freight spot market as its components are comprised from roughly 6,500 Canadian carriers and freight brokers. This data includes all domestic, cross-border, and interstate data submitted by Loadlink customers.