Loads, loads, and more loads for November as accelerated daily volumes are seen throughout the month.

“These past few months have shown a clear sign that even through all of the uncertainty that the pandemic continues to cast, along with the bottlenecks within the supply chain, the spike in demand remains strong,” says Claudia Milicevic, president of Loadlink Technologies.

November’s Canadian spot market saw significant surges in the movement of freight within Canada and in and out of Canada.

Month-over-month, loads from Canada to the United States were up 28 percent compared to October 2021, while year-over-year, there was a triple-digit increase of 113% of loads leaving Canada bound for the United States. Equipment postings were nine percent lower from October and showed no change compared to November 2020.

There was a significant spike in loads coming into Canada where there was an equal percentage increase of 46 percent in load volumes compared to last month as well as compared to November of last year. Equipment postings were lower by three percent from October and up six percent year-over-year. 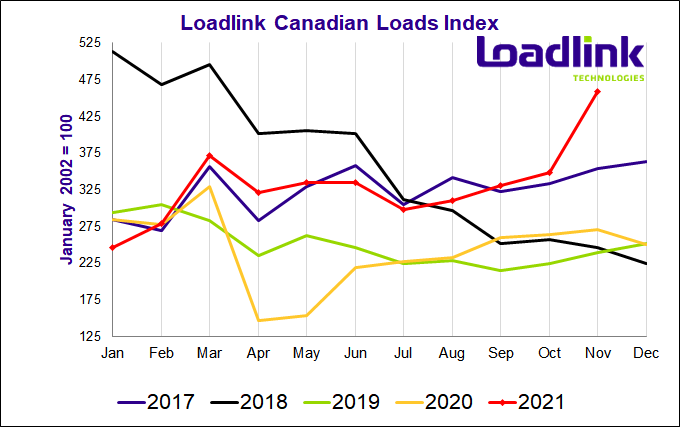