Huge monthly improvements in outbound cross-border postings for Ontario and Western Canada, yet Quebec trailblazed as best performing market so far into Q3 2021

Once again, outbound cross-border loads were the best performing area of Loadlink as overall load posting volumes spiked another 42 percent in August from an already impressive 24 percent gain in July. Year-over-year, this number was 66 percent higher than in August 2020. Equipment postings fell 11 percent on a monthly basis and remained unchanged from last August.

Both Ontario and Western Canada followed in Quebec’s footsteps from last month as both regions saw a 55 and 44 percent increase in outbound cross-border loads, respectively. Quebec continued its standout performance this quarter with another consecutive month of significant gains as outbound loads from the region rose 22 percent.

Like July, inbound cross-border activity in August saw an overall decline to counteract some of the gains from improved outbound volumes. Inbound cross-border load postings declined 15 percent compared to July, while year-over-year, were up 14 percent from August 2020. Equipment movement was more active than the outbound side as there was an 11 percent increase in truck postings entering Canada, and 22 percent more postings than in August 2020.

Loads entering Canada from across the border saw declines across all regions of Canada. Unlike last month, August saw the biggest drop in volumes with 28 percent less freight. Ontario followed behind with a 13 percent decrease, while both Quebec and Atlantic Canada saw minor drops of four and six percent, respectively. 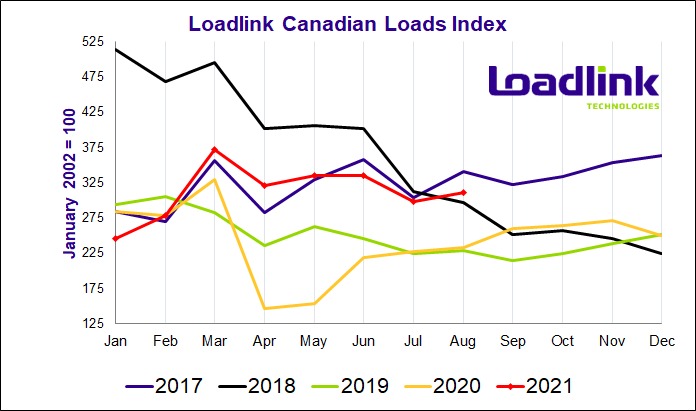