TORONTO – Loadlink Technologies reports today that the Canadian spot market saw load volumes fall 11 percent compared to June’s posting numbers. The Canada Day and American Independence Day national holidays at the start of the month likely played a role in diminished volumes as average daily postings dipped six percent per day from June. Despite lesser overall volumes, Quebec stood out with very strong outbound load volumes on both the cross-border and domestic front. On a year-over-year basis, load volumes continued to showcase 2021’s improved performance as postings were up 31 percent from July 2020.

Canada’s growing return to normalcy, following prolonged periods of lockdowns due to the COVID-19 pandemic, have helped maintain balance within the domestic trucking industry. As seen from Loadlink’s monthly performance in the past few months, fluctuations in load volumes have been mainly due to changes in the outbound versus inbound cross-border dynamic.

Outbound cross-border lanes were the best performing on Loadlink as load posting volumes were up 24 percent from June. Year-over-year, this number was 49 percent higher than in July 2020. July’s strong outbound performance helped reduce the overall monthly decline as inbound load movement fell at a larger pace.

In contrast to the strong growth in monthly outbound cross-border freight, inbound activity suffered similar but opposite levels of decline with 29 percent lower volumes than in June. On a year-over-year basis, load postings were up 20 percent compared to July 2020.

After a slight dip in June, intra-Canadian volumes stabilized once again with virtually no change in July from June’s numbers. Year-over-year, load postings were up 33 percent from July 2020.

Domestic freight destined for Western Canada was the best performing inbound region with 22 percent more loads. Ontario was the only other positive performer with four percent more inbound freight entering the region. Atlantic Canada saw a decline of 13 percent less loads from June, while Quebec’s strong outbound performance could not be replicated on the inbound-end experiencing 37 percent less freight compared to last month.

Domestic outbound freight performance was the opposite of what was seen from the inbound regions. Quebec led the way with the strongest performance of 27 more outbound freight exiting the province, similar to its fantastic cross-border activity. Atlantic Canada was the source of just five percent more domestic freight. Both Ontario and Western Canada delivered less freight out of their regions with nine and seven percent declines, respectively. 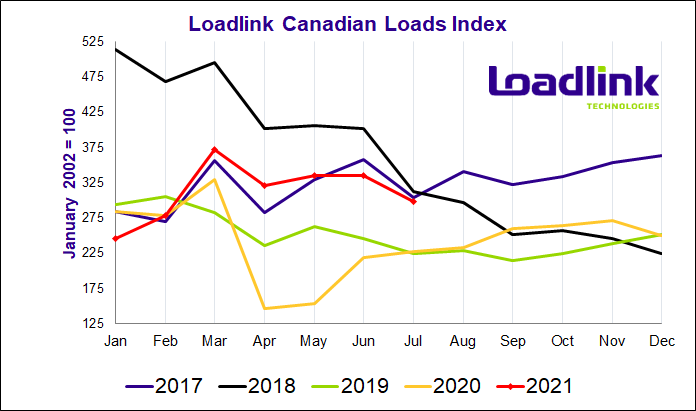