For the third consecutive month, outbound cross-border loads saw the largest improvement in load postings. Month-over-month, loads from Canada to the United States were up 14 percent, while year-over-year, this number was 35 percent higher than September 2020. Equipment postings fell nine percent on a monthly basis and were down five percent from September 2020.

Quebec continued to show no signs of slowing down as the province saw a 27 percent increase in outbound loads heading across the border. Atlantic Canada also saw a surge in volume with a 46 percent increase on lesser total volumes. Ontario was up by eight percent more loads while Western Canada outbound load postings remained unchanged from August.

Ontario was the only province that saw positive change from August as freight volumes jumped 16 percent. Quebec and Western Canada had an average decline of 14 percent while Atlantic Canada only saw a seven percent drop in postings.

Domestic freight activity saw similar improvements as outbound cross-border activity due to a 13 percent boost in loads from a previously stagnant month of August. Year-over-year, domestic load movement improved by 38 percent from September 2020. Compared to August, equipment volumes fell slightly by five percent, but were up seven percent from last year. 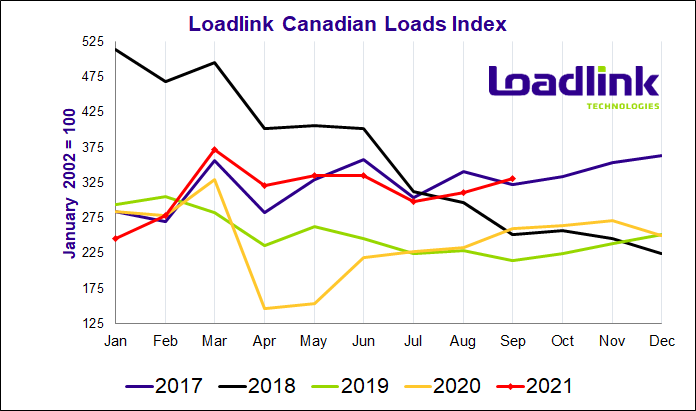