With the overall uptick in load performance, “Carriers that performed better than this in May, are ahead of the market,” says Claudia Milicevic, senior director & general manager of Loadlink Technologies. With early June volumes showing signs of further improvement, carriers should continue to closely monitor market conditions in preparation for a potential upswing in freight demand. 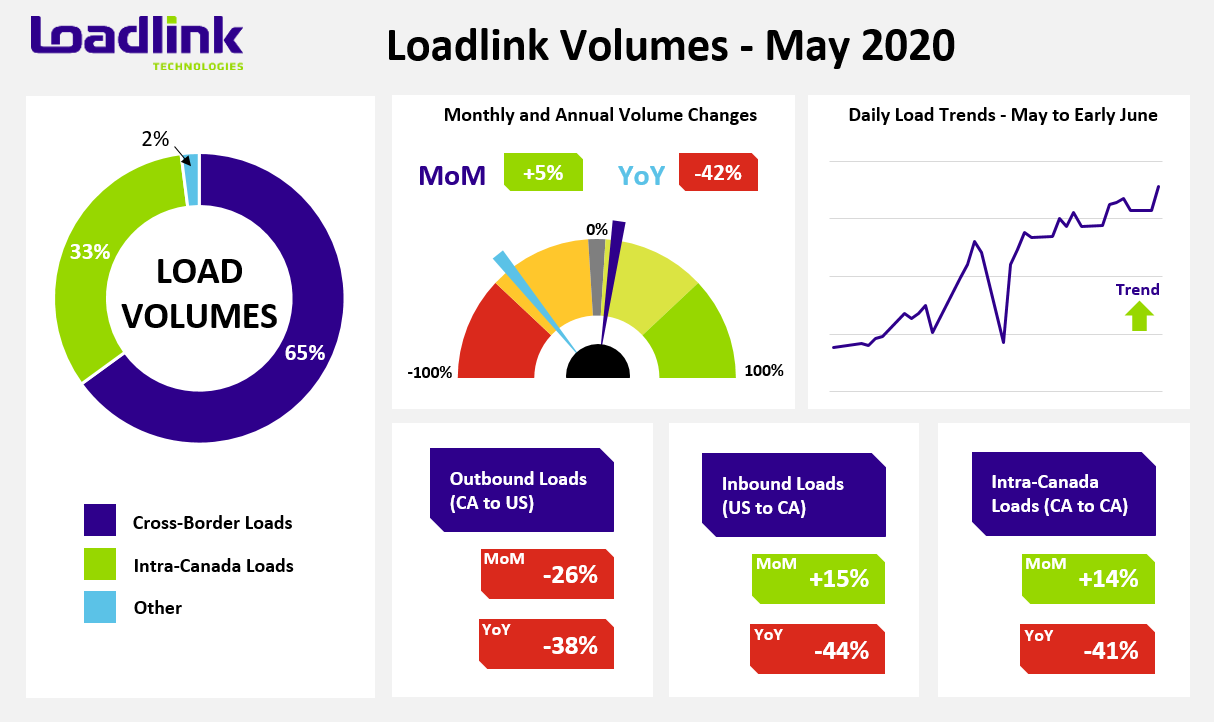 It was outlined in Loadlink’s previous Freight Index report that Loadlink Technologies expected April load volumes to represent the floor for freight during this period of the coronavirus pandemic. With May’s small improvement, that prediction is looking more accurate as the reopening of economies across North America should drive additional activity and demand to the freight market.

With economies picking up on both sides of the border, the largest provincial/state market lanes that strengthened were cross-border markets. Quebec and Alberta were heavily involved in better performance as the following lanes all showcased large boosts in postings on Loadlink’s spot market. The following table also outlines how many more or less unique companies posted in these lanes, showing expanded activity from a greater share of the industry. The greater number of different companies posting in these lanes can be indicative of reopening sectors requiring more capacity following prolonged periods of inactivity or closures.

*Based on lanes with at least 500 postings in May.

April’s poor load performance meant only a quarter of the top 100 busiest city-to-city lanes on Loadlink saw a load volume increase from March. While in May, this number progressively rose to 62 lanes that saw a boost in load postings since April. Contrary to April when the California and Florida markets heated up, the month of May saw steady gains across a variety of markets. Significant improvements in popular intra-Canadian lanes such as the Greater Toronto Area (GTA) to the Montreal market where activity is abundant, normally signals overall healthier conditions on Loadlink’s spot market.

The following city-to-city lanes saw vastly improved freight volumes on a monthly basis. Despite the monthly improvements, year-over-year comparisons are still weak as the effects of the pandemic will continue to dampen the freight market and sentiments will remain muted until a big rebound in market or overall economic conditions occurs.

Based on data from past years, freight volumes from May to June normally see only slight adjustments upwards or downwards. The ongoing pandemic may cause a change in tradition as daily volumes in the first two weeks of June are up nine percent compared to the latter two weeks of May.

An increase in loosening physical distancing protocols and business openings following government announcements (Ontario Phase 2) should bring a boost in economic activity, which will trickle down to the trucking industry.

With early June volumes on the uptick, some standout city-to-city lanes in the first 10 days of June saw tremendous improvement compared to the last 10 days in May. The Vancouver (BC) to Toronto (ON) lane was the biggest winner entering June with volumes up 332 percent during this period. The Mississauga (ON) to Quebec (QC) market followed with 169 percent gains and Houston (TX) to Mississauga (ON) was next with a 153 percent increase. The outbound market of Calgary was busy as the Calgary (AB) to Edmonton (AB) and Winnipeg (MB) saw an average jump of 127 percent higher volumes.

On the opposite end, only a handful of some busier lanes saw reduced load postings during this period. In particular, volumes in Texas to the GTA markets fell an average of six percent. This included lanes involving cities such as McAllen, Laredo, and Edinburg.