Only a Quarter of Canada’s busiest Lanes on Loadlink’s Spot Market Saw Load Volumes Increase, while the Remaining Saw Declines

Only a Quarter of Canada’s busiest Lanes on Loadlink’s Spot Market Saw Load Volumes Increase, while the Remaining Saw Declines

Load volumes down but the worst may have already passed. 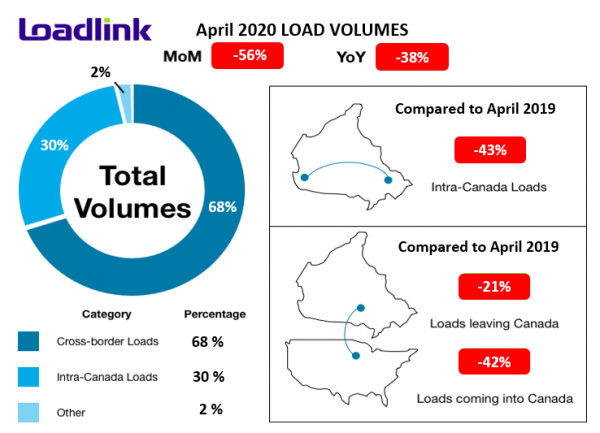 Progression in the novel coronavirus pandemic continued to take its toll on the trucking industry with further reduced freight levels. While March volumes were propelled by extreme inventory stockpiling, that dynamic was reversed in April as muted demand washed across North America and a new “normalcy” in consumer spending habits became prevalent.

Load volumes saw consistent declines from all regions in Canada regardless of cross-border, intra-Canadian, outbound or inbound status. As a result of declining load volumes, truck availability increased 15 percent from March. Less contracted loads due to manufacturing closures would have forced more carriers to look towards the spot market to fulfill their excess capacity. Reduced spot market loads would have further caused carriers with greater exposure to spot freight to post more of their available trucks on the system.

Of the top 100 busiest city-to-city lanes on Loadlink, only a quarter (25) of them saw load volumes increase month-over-month. The biggest gains for the month came from the outbound markets of California and Florida. These major agricultural markets saw huge seasonal boosts as mature crops entering spring were ready for export to the large Canadian markets of Toronto and Montreal.

This seasonal influence was seen when compared to the immense monthly gain to the lesser year-over-year change (ex. Salinas, CA to Toronto, ON). For reference, the Salinas to Toronto and Montreal lanes saw monthly gains of 590 and 175 percent, respectively, from March 2020 to April 2020. This indicated a prime time for the market and that despite current economic conditions, continued to be strong. Loads from Miami, FL benefited from the seasonal transition, but were down compared to the same period last year.

Loadlink saw consistent increase in volumes in the first week of May compared to the last week of April. In contrast to the overall monthly observations in April mentioned above, intra-Canadian city lanes saw higher load volumes at the start of May versus cross-border lanes.

The Calgary (AB) to Saskatoon (SK) lane saw volumes go up 82 percent week-over-week. Other markets that were busier during the week were Winnipeg (MB) to Calgary (+65%), Toronto to Calgary (+50%), Toronto to Montreal (+32%), and Toronto to Winnipeg (+25%). All these lanes saw an average monthly decline of 61 percent from March, but performed better entering May.

On the other hand, the aforementioned produce markets of California and Florida saw losses entering May. Following huge gains in April listed in the table above, loads from the Salinas to Montreal lane were down 21 percent in the first week of May, while the Miami to Toronto and Montreal lane saw volumes fall an average of 43 percent. The Salinas to Toronto lane continued to see more freight, albeit at a much smaller rate of six percent, week-over-week increase.

In the near future, the reopening of some automotive manufacturers will likely provide a boost in volumes for many carriers that operate within the automotive space. As the United States and Canadian governments continue developing a plan to reopen the economy, the short term outlook for the Canadian trucking industry can only improve with manufacturing resuming.

Loadlink believes that April load volumes could possibly represent the absolute bottom levels of freight during this period of decline, and at worst, May volumes will be level, but have a far higher ceiling and opportunity for improvement with manufacturing and non-essential products resuming, and with the reopening of the economy. This is a result of governments and economies better adapting to the impacts of the coronavirus and taking countermeasures for maintaining health, safety and stability while allowing the economy to recover.

Loadlink’s Canadian Freight Index accurately measures trends in the truckload freight spot market. The components of the Freight Index are comprised from roughly 6,000 of Canada’s trucking companies and freight brokers. This data includes all domestic, cross-border, and interstate data submitted by Loadlink customers.

Looking for a better way to match available freight loads with trucks, Loadlink Technologies developed Loadlink in 1990. Loadlink is a load board connecting brokers, carriers, owner operators and private fleets in Canada to a real-time database of 19 million loads, shipments, and trucks – the largest in the industry.

More information on Loadlink Technologies can be found at www.loadlink.ca and @loadlink on Twitter.