TORONTO – Load volumes on Canada’s spot market saw the largest highly monthly volumes, since March 2020 when the pandemic first began, with load numbers up 13 percent compared to last month. Notably, single-day load volumes reached a peak in February that had not been seen since mid-2018.  Year-over-year, there was no change from February 2020. Truck postings remained consistent from January but were up eight percent from February 2020.

Loadlink Technologies foresaw the potential rise in volumes in February due to the phased lifting of COVID-19 lockdown restrictions across many communities in Ontario as well as Quebec. The recovery that occurred in the middle of the month coincided with multiple reopening economies across Ontario.  Previous domestic lockdowns presented ample opportunity for the spot market to recover once restrictions were lifted. February’s strong freight performance proved this point as domestic loads rose by 20 percent.

Based on recent load volume trends and February’s welcomed recovery in load postings, Loadlink Technologies predicts load volumes to further improve and surpass March 2020 numbers to reach a new monthly high not seen since June 2018. Barring any setbacks or announcements of new COVID-19 lockdowns and/or restrictions on the domestic front, Loadlink’s spot market load volumes may be in for a potential double digit percentage increase month-over-month, while equipment postings may rise but at a lesser rate. This is an opportunity for carriers and brokers alike to begin preparing for a busier season as available loads on Loadlink will keep trucks occupied and as a result, rising spot rates may be on the horizon.

As further evidence of lifted lockdown restrictions fueling the surge in freight activity on Canada’s spot market, Ontario outbound lanes surpassed British Columbia with some of the best performing provincial/state lanes in February. Four out of the top 10 lanes with the largest percentage gains from January originated from the Ontario cross-border outbound market. The inbound markets of Maine, Connecticut, New Jersey, and Massachusetts all saw monthly gains of 138, 99, 95 and 86 percent more loads, respectively. Western Canada continued its strong and consistent performance with the British Columbia to Colorado and Alberta to Minnesota lanes both up an average of 104 percent month-over-month. Recovery in the province of Quebec was also apparent as the inbound markets of Michigan and Virginia narrowly missed out on the top 10 list with an average monthly change of 79 percent.

The ongoing trend of increasing inbound cross-border load volumes was quelled slightly as February only saw a one percent gain from last month, while on a year-over-year basis, improved 14 percent compared to February 2020. Equipment volumes went up three percent from January and were up four percent from last year. Inbound volumes fell across all major Canadian regions barring Western Canada, which saw 27 percent more loads entering the region and singlehandedly propped up the overall monthly inbound cross-border change to a positive level. All cross-border inbound Western Canada lanes with sufficient volumes in February saw a boost in loads except the California and Arizona to Alberta markets, which saw minor declines of under five percent.

Compared to January when all states delivered more freight to Canada except Connecticut, Nevada, and Utah, February saw roughly only 60 percent of all states show a monthly improvement in outbound volumes. Of the busiest state markets in February, Illinois (-20%), Texas (-8%), Washington (-6%) and Ohio (-5%) all delivered less freight to Canada while California (+12%) and Pennsylvania (+11%) saw better performance. The single lane with the largest percentage increase on Loadlink’s spot market in February belonged to the inbound cross-border lane of Illinois to British Columbia as loads surged 159 percent from January. The next two best performing inbound lanes involved British Columbia as loads from both the Oregon and Wisconsin outbound markets were up 102 and 82 percent, respectively. The traditionally busier outbound markets of Texas and Washington trended similar to Western Canada’s overall better performance of 27 more inbound cross-border loads with an average increase of 28 percent more loads.

February’s overall increase in freight activity was largely in part due to improved domestic load movement, breaking the recent trend seen in the past few months of declining Canadian activity. All major regions in Canada saw improvements in both outbound and inbound volumes. In terms of originating region, Quebec led the charge with 41 percent more loads, followed by Ontario (+19%), then Western Canada (+15%) and Atlantic Canada with only minor gains (+2%). Based on receiving region, Ontario held top spot with 33 percent more loads entering the region, followed by Atlantic Canada (+29%), Quebec (+24%), and lastly, Western Canada with eight percent more loads.

Further demonstrating intra-Canadian improvements’ effect on the spot market’s overall incline in freight, the top three lanes with the largest absolute increase in load postings belonged to the Ontario to Quebec freight corridor. COVID-19 lockdowns in both provinces limited freight flow between the two in recent months, but loosening restrictions opened the floodgates as businesses reopened across many municipalities. 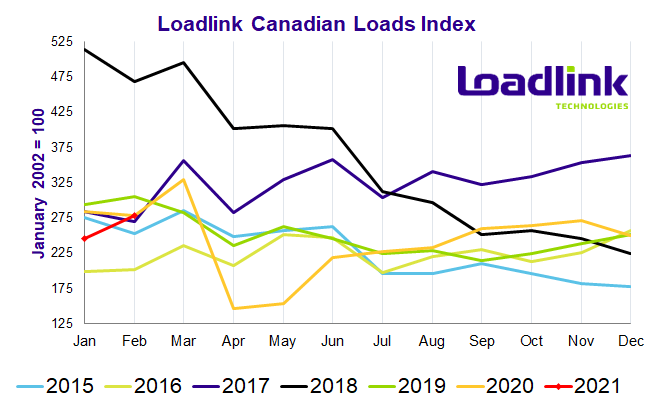 *Based on lanes with at least 500 postings in February. Ranking is based on how many more loads that lane gained month over month, compared to all lanes visible on Loadlink (with minimum 500 postings).

*Based on lanes with at least 500 postings in February. Ranking is based on how large the percentage increase in loads for that lane was compared to all lanes visible on Loadlink (with minimum 500 postings).

Figure 1: Top 10 Lanes in February by Largest % Increase in Average Loads per Poster 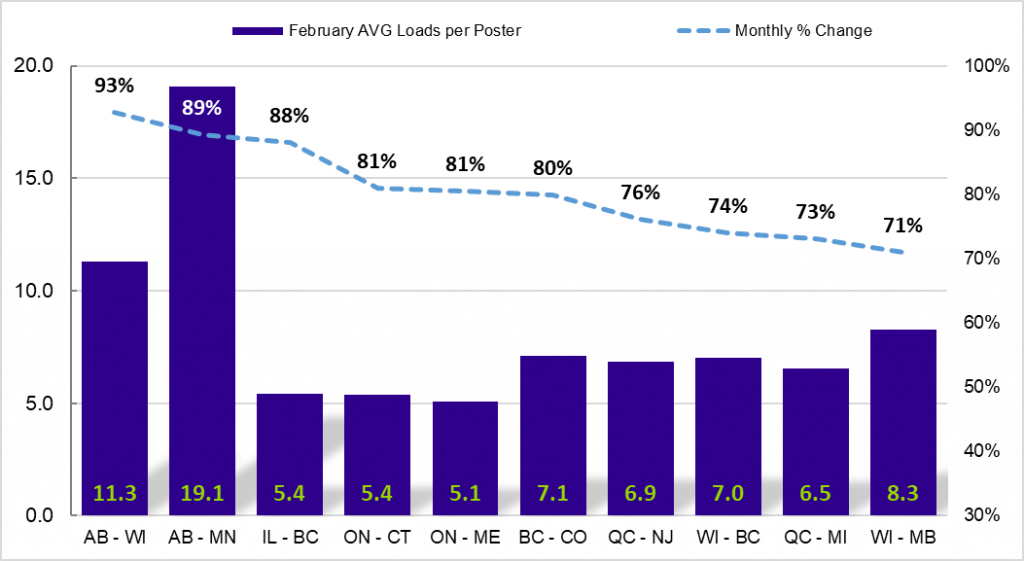 In February, capacity tightened by 12 percent, reaching a value of 2.61 compared to 2.97 in January. Year-over-year, February’s truck-to-load ratio was eight percent higher compared to a ratio of 2.42 in February 2020.