Overall, Loadlink’s load volumes peaked to levels not seen since mid-2018 as first full month out of lockdown for some regions in Ontario, just in time for busier season, saw freight activity swell.

As Loadlink Technologies had predicted, load volumes soared following a strong recovery in February. February’s strong end to freight numbers continued into March’s strong gains, which ended up hitting peak volumes not witnessed since mid-2018 when a capacity crunch caused freight to flood the spot market. Reopening economies and expected booms for businesses also added more truck availability onto the spot market as carriers turned to the spot market to capitalize on the influx of freight, marking a new record high for equipment postings in any March on Loadlink’s record. Due to March’s strong overall performance, the first quarter of 2021 exceeded even the first quarter of 2020 (pre-pandemic).

Unfortunately, due to further outbreaks of the novel coronavirus and a third wave hitting Canada, stricter measures have currently been imposed on several provinces with the situation most serious in Ontario (Canada’s most populous province) followed by, Quebec and British Columbia. At the time of writing, early April load volumes dipped slightly as average daily load volumes in the first week were 17 percent lower than the last week of March with the Easter long weekend causing April to begin the month at a slower pace.

Because of the renewed lockdown restrictions and lesser business days, Loadlink Technologies expects freight activity on the Canadian spot market to fall from March’s outstanding numbers. Loadlink expects mixed results for Canadian spot market activity in April as rapid economic growth in the US coinciding with the produce season will boost load volumes, while ongoing Canadian lockdowns will temper the possible surge in freight. Increasing vaccine availability across Canada and future reopening of the economy post-lockdown will increase consumer spending and economic growth, and may result in an influx of freight similar to the US market.

Outbound cross-border load volumes in March continued the upward trajectory from February’s improved performance. On a monthly basis, load postings increased 12 percent but were down 16 percent from March 2020. Improvements in equipment numbers were steady and rose at a similar pace of 21 and 23 percent on a month-over-month and year-over-year basis, respectively.

The first three outbound cross-border lanes appeared outside the top 40 with the best improvements originating from Western Canada, which has continued to showcase its strong load numbers since late 2020. The three aforementioned lanes were all destined to Midwest states bordering Ontario, and were as follows: British Columbia to Minnesota (+73%), Alberta to Wisconsin (+72%) and Alberta to Illinois (+62%). The next busiest outbound lane belonged to Ontario to Alabama, which saw 61 percent more postings from February.

Barring the states of Maine, Arizona and Massachusetts, all originating states delivered more freight into Canada than in February. The Ontario market was the recipient of the most inbound freight as nine out of the top 10 inbound cross-border lanes with the largest boosts in freight were destined to the province. Most notably, outbound loads from Missouri more than doubled with an increase of 113 percent. Other notable outbound markets into Ontario that saw the most gains were Texas (+77%), North Carolina (+75%), Tennessee (+74%) and Virginia (+71%). The last lane of the top 10 belonged to the Quebec inbound market as the outbound market of Texas once again saw huge improvements from February with 84 percent more loads.

Continuing from February’s rise in domestic activity in Ontario and Quebec due to lessened lockdown restrictions, the Quebec to Ontario (+63%) lane held the top spot in terms of overall increased load postings for March. The local Ontario province was also very busy as freight movement was up 41 percent. The consistent Western corridor between Alberta and British Columbia occupied the third busiest domestic lane with 34 percent more loads, followed by two more Western lanes of Alberta to Saskatchewan and the intra-British Columbia market. Alberta to Saskatchewan more than doubled in freight activity from February with 121 percent more loads and was the 24th busiest lane on Loadlink in March. 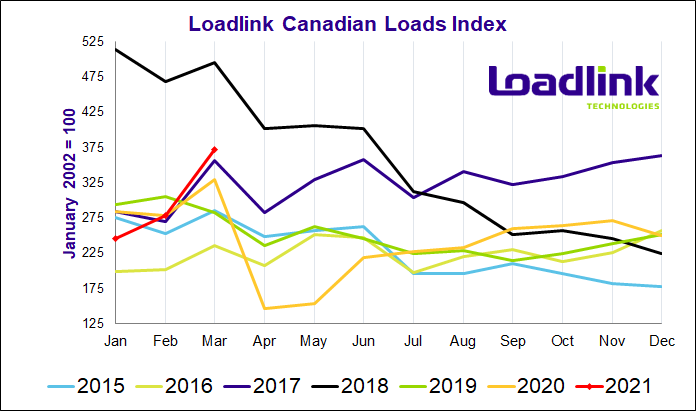 In March, the traditionally busy Quebec and Ontario corridor held strong once again occupying the top spot, while the local Ontario market held the same position from February, but saw a larger gain in loads. Vastly superior inbound cross-border activity was once again apparent with the Ontario outbound market receiving more freight, and occupied the remainder of the top five lanes with more loads.

*Based on lanes with at least 500 postings in March. Ranking is based on how large the percentage increase in loads for that lane was compared to all lanes visible on Loadlink (with minimum 500 postings).

*Based on lanes with at least 500 postings in March. Ranking is based on how large the percentage increase in loads for that lane was compared to all lanes visible on Loadlink (with minimum 500 postings).

Figure 1: Top 10 Lanes in March by Largest % Increase in Average Loads per Poster 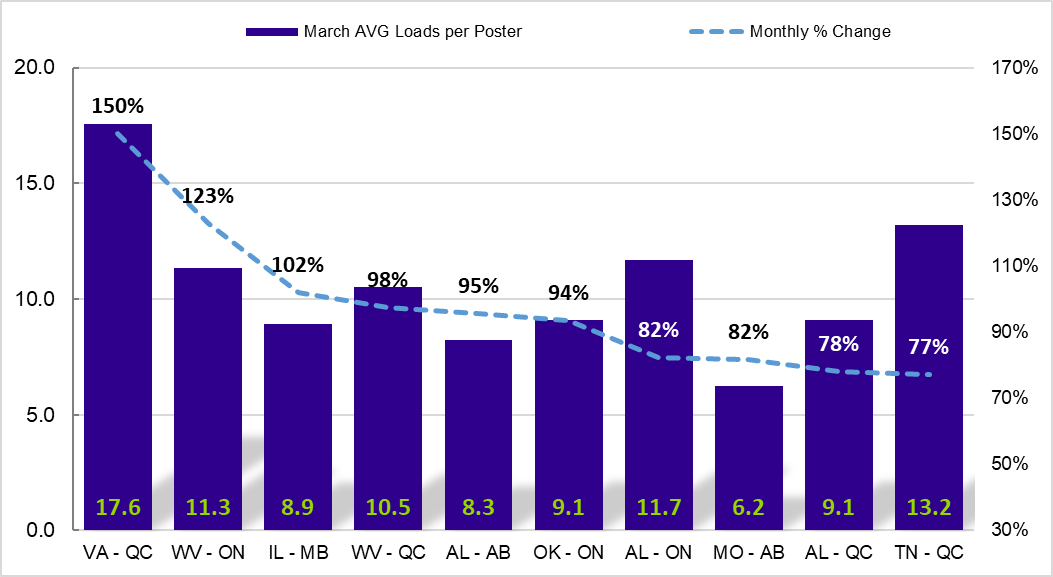 In March, capacity tightened by 13 percent, reaching a value of 2.27 compared to 2.61 in February. Year-over-year, March’s truck-to-load ratio was four percent higher compared to a ratio of 2.18 in March 2020.