One year since the start of the pandemic first caused drastic declines in freight, the spot market bounced back marked the first month in Loadlink history with a three-figure, year-over-year increase in loads.

TORONTO – Loadlink’s Canadian spot market in April had over double the number of loads available compared to April 2020 when the novel coronavirus pandemic first began. The overall road to recovery for Canada has been arduous, and the pandemic has challenged Canadian trucking companies to rethink how they conduct business in a way that they have not been challenged to do so before. On a monthly basis, April saw loads volumes fall slightly by 14 percent, primarily due to the lesser number of business days compared to March. When adjusted for this, average daily load volumes only fell slightly by five percent, which is in line with the average seasonal decline that usually occurs from March to April. Year-over-year, April 2021 surpassed the previous April’s total by 120 percent.

In April, outbound cross-border loads fell 16 percent from March, but were up 54 percent year-over-year compared to April 2020. Equipment postings remained nearly unchanged with just a single percentage point decline, while on a year-over-year basis, increased 12 percent.

Inbound loads from across the border saw the biggest monthly decline of 20 percent out of the three freight movement types on Loadlink. When compared to April 2020, inbound cross-border load volumes more than doubled with an impressive 145 percent increase. Equipment numbers remained steady from March at just a one percent increase, but were down three percent from April 2020.

In April, domestic activity on Loadlink remained unchanged month-over-month, meaning the Canadian spot market continued to hold strong and steady following the substantial gains that had occurred in March. This helped offset the declines seen in cross-border freight movement. On a year-over-year basis, load volumes more than doubled with a 132 percent increase from April 2020. Equipment volumes fell slightly by four percent from March, and were consistent with just a single percentage point decrease year-over-year.

In terms of domestic outbound freight, all regions saw positive growth in April, except for Western Canada. Atlantic Canada and Quebec saw the largest gains of 26 and 17 percent more freight originating from these provinces, respectively. Ontario bumped up slightly with three percent more loads, while Western Canada delivered 11 percent less loads to the rest of the country.

For domestic inbound freight, the opposite occurred; Western Canada was the only freight-receiving region with a positive gain (+1%), while the other regions all received less freight. Ontario received five percent less loads, Quebec lost 10 percent of volumes, and Atlantic Canada received 87 percent less compared to March. 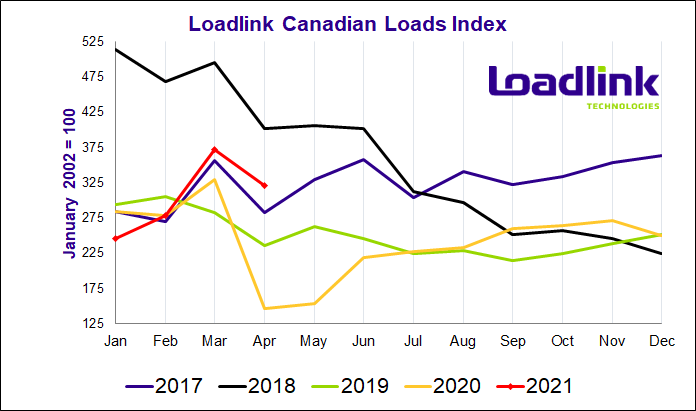 In April, the truck-to-load ratio increased by 15 percent, reaching a value of 2.60 compared to 2.27 in March. This was a result of average daily truck postings increasing by eight percent from March while average load postings dipped five percent. Year-over-year, April’s truck-to-load ratio was 54 percent lower compared to a ratio of 5.64 in April 2020.