TORONTO – Canada’s truckload spot market started the new year with relatively little change from how 2020 ended. January saw two percent less loads compared to December 2020 which may have been a result of additional COVID-19 lockdown measures across Canadian provinces in December and into 2021. Due to these provincial lockdowns, intra-Canadian freight volumes saw a noticeable decline again as cross-border freight comprised almost three-quarters of all load posting activity on Loadlink’s spot market. Year-over-year, there were 13 percent less loads against January of 2020.

As mentioned, continued lockdowns from the end of 2020 dampened freight volumes so far in 2021 for the short-term. Recent news of loosening restrictions across Quebec may help increase freight demand in February, while phased reopenings of certain regions within Ontario may also increase freight flow from within the province.

For the fourth consecutive month, outbound cross-border load volumes saw both a month-over-month (-33%) and year-over-year (-31%) decline. Equipment postings rose 22 percent on a monthly basis, but fell seven percent on year-over-year comparisons to January 2020. Once again, outbound activity was muted across all regions of Canada, but Western Canada saw the smallest decline of 13 percent while the rest of Canada averaged 38 percent less loads destined to the United States.

Continuing from December 2020’s trend of growing inbound cross-border freight volumes, January saw inbound loads grow 29 percent month-over-month and decline just four percent on a year-over-year basis. Equipment volumes were down six percent from December and fell four percent compared to January 2020. In December, Western Canada stood out with the only double digit gains, but in January, barring Atlantic Canada’s decrease in inbound cross-border freight, Western Canada was the only major region to see only a single digit increase. The Ontario and Quebec inbound markets both stepped up from December with impressive boosts in inbound freight volumes of 37 and 34 percent, respectively.

All states saw more freight entering Canada except for Connecticut, Nevada and Utah. The busiest markets that also saw some of the largest gains in comparison to other states included Texas (+28%), Ohio (+23%), Illinois (+63%), Pennsylvania (+49%) and Wisconsin (+43%). On a percentage increase basis, the two states that saw the largest relative monthly increase in freight to Canada were Mississippi (+81%) and Montana (+72%).

January saw intra-Canadian activities continue from where December left off as both inbound and outbound volumes across all regions saw further dips in activity. Unlike December, where the average decline spread between the major regions were all relatively similar to one another, January’s intra-Canadian declines varied more.

The province of Ontario saw 24 percent less outbound freight against 28 percent less inbound freight, which was the most heavily impacted region as a result of the continued provincial lockdown announced in December. Quebec load volumes were down 20 and 22 percent for total inbound and outbound volumes, respectively. Western Canada performed better than both Ontario and Quebec as declines in freight were limited to lesser amounts: a 14 percent decrease in outbound loads and a 10 percent drop with respect to inbound loads.

Among the popular domestic lanes with sufficient posting data, Western Canada once again shone with the only lanes that saw positive growth in January. On a total volume basis, Alberta to Manitoba performed the best out of all domestic provincial lanes with a month-over-month increase of 26 percent. The British Columbia outbound market to Alberta and Manitoba both saw decent gains of 12 and 51 percent more loads, respectively, but each lane had about a third of the total freight activity as Alberta to Manitoba. 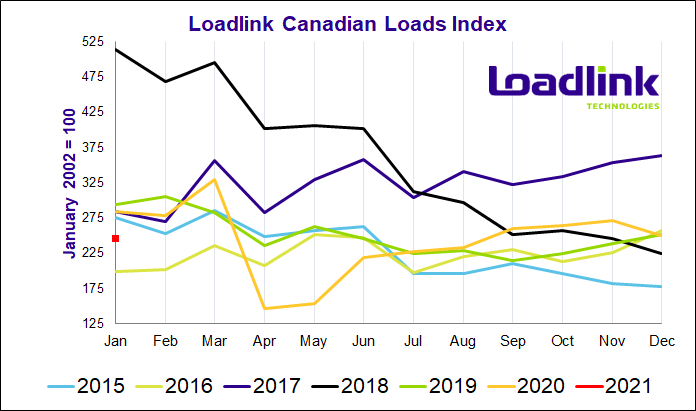 In January, inbound cross-border lanes topped the list of best performing lanes on Loadlink’s spot market for another month.

*Based on lanes with at least 500 postings in January. Ranking is based on how many more loads that lane gained month-over-month, compared to all lanes visible on Loadlink (with minimum 500 postings).

*Based on lanes with at least 500 postings in January. Ranking is based on how large the percentage increase in loads for that lane was compared to all lanes visible on Loadlink (with minimum 500 postings).

Figure 1: Top 10 Lanes in January by Largest % Increase in Average Loads per Poster 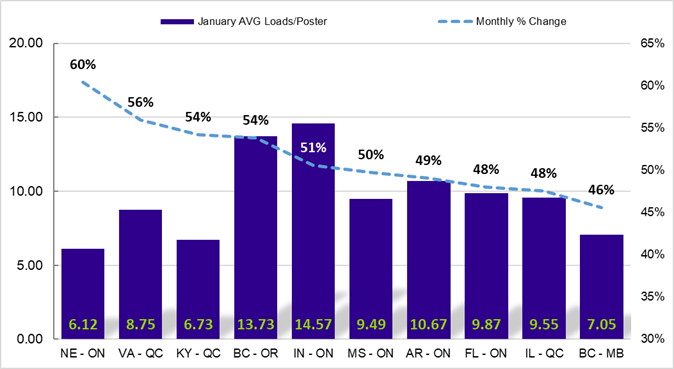 The following city-to-city lanes saw notable improvements in freight volumes on a monthly basis. Compared to the large decline witnessed in December that saw more than half of the top 100 city-to-city lanes decline in freight activity from November, two-thirds of the lanes in January saw positive growth on a monthly basis. As a result, a total of 67 lanes saw increased month-over-month comparisons, while exactly half of the lanes saw positive year-over-year changes.

In January, capacity expanded by eight percent, reaching a value of 2.97 compared to 2.75 in December. Year-over-year, January’s truck-to-load ratio was 11 percent higher compared to a ratio of 2.68 in January 2020.