Canadian spot market shows continued freight recovery as September on pace for growth based on the month’s first week of loads.

TORONTO – At the end of August, load volumes rose as the month transitioned into September. The first week of September had the highest load volumes seen since March prior to the onset of the pandemic. A possible reason for improved numbers in the first week may be due to preparations for back-to-school activity. Following a strong start to the month, volumes lessened in the second week as a result of the Labour Day holiday observed in the United States and Canada.

At the time of writing, average daily load numbers in September are up five percent compared to the average value across all of August. If this pace of growth can be sustained through the remainder of the month, overall freight volumes at the month’s end may exceed August by 10 to 12 percent. 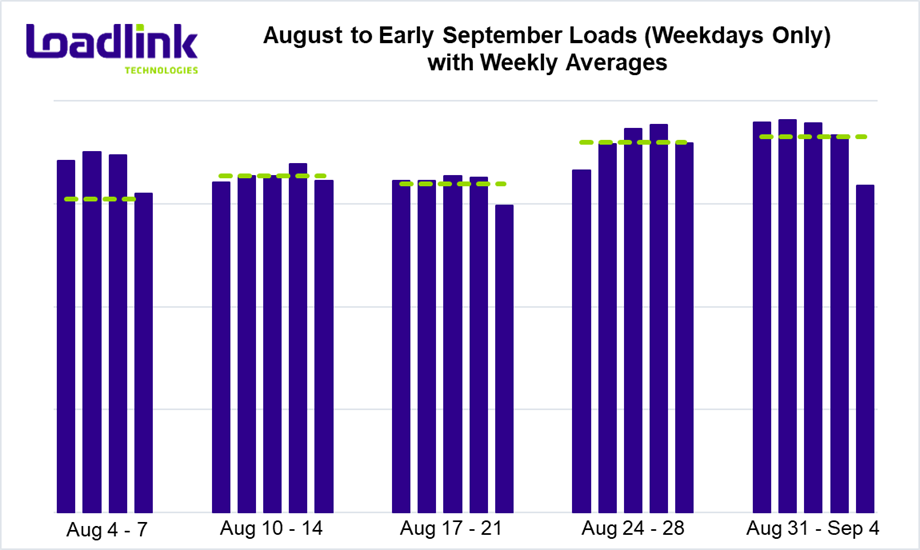 According to Loadlink’s first week of volumes in September, higher load volumes were a result of more postings across various markets and lanes, rather than a few popular lanes contributing to majority of the boost in freight. This is evident as 57 percent of lanes with sufficient postings (minimum 150) in the first week saw declines in volumes from the last week of August, but total volumes were greater. Despite a greater number of these busy lanes falling in load numbers, a few cross-border lanes saw substantially higher posting quantities.

The Manitoba to Illinois lane was the big winner as load volumes rose 610 percent from the last week of August. The Quebec outbound lane to Tennessee came in next with a 154 percent increase in load postings. Ontario to South Carolina was third in line with a 122 percent rise in loads. The Massachusetts inbound market also saw notable gains as freight entering the market from Ontario and Quebec both increased 43 and 33 percent, respectively.

Other domestic lanes that saw the largest gains were the markets of Quebec to New Brunswick (+25%), Nova Scotia to Ontario (+24%), and the popular Quebec to Ontario lane (+16%). In terms of absolute volume changes, the Quebec to Ontario lane was the obvious winner as it is the busiest corridor on Loadlink’s spot market. The backhaul lane of Ontario to Quebec saw loads fall 13 percent. Other popular domestic lanes that saw declines in freight volumes included Alberta to British Columbia (-2%), the local Ontario market (-2%) and Ontario to Alberta (-31%).

At the time of writing, September’s early truck-to-load ratio sits at 3.43 and is two percent lower than August’s value. This was a result of peak daily load volumes witnessed in the first week of the month as Loadlink’s spot market saw the highest number of daily load postings since the pandemic.