TORONTO – September load volumes showed respectable growth from August, with the last week of the month reaching the highest freight totals since prior to the pandemic. The last day of the month, in particular, had the highest single day volume since more than six months ago. With the third quarter of 2020 ending, freight postings may have also been pulled forward from early October.

Early October volumes performed well; however, daily averages were down six percentage points compared to the last week of September. As restrictions remain on the size of group gatherings, demand from the spot market due to smaller or lesser amount of Thanksgiving festivities may have reduced.

At the time of writing, early average volumes into mid-October have risen slightly by about five percent from the first week of the month. If load volumes continue trending in a similar fashion, Loadlink Technologies expects freight demand on the Canadian spot market to remain relatively flat or have low single-digit growth. 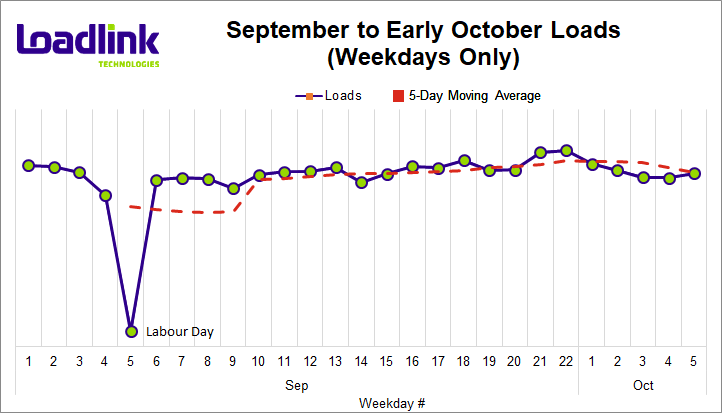 The top three cross-border lanes that saw the largest percentage growth week-over-week were the Arizona to Ontario (+35%), Alberta to Washington (+34%) and Arkansas to Ontario (+30%) lanes. The Texas market was busy on both ends as it saw an average of 20 percent more loads to and from Quebec, while freight between the Ontario inbound and outbound market improved an average of seven percent. Canada’s west coast saw improvements with neighbouring United States as British Columbia to Washington and Oregon averaged a 13 percent improvement in freight volumes.

In terms of city-to-city lanes, the following markets saw some of the largest week-over-week growth in absolute load volumes: McAllen, TX to Toronto, ON (+78%), Memphis, TN to Montreal, QC (+242%), Huron Park, ON to Valparaiso (+445%) and Nogales, AZ to Toronto, ON (+58%). Among the other cross-border lanes that saw weekly improvements, many involved the usual busy markets in Texas, Florida, and Illinois. This indicates that some of Loadlink’s busiest cross-border lanes are still performing strong despite the ongoing pandemic on both sides of the border.

Of the intra-Canadian provincial lanes with sufficient freight demand, over two-thirds saw a monthly improvement in the first week of October. Overall, the best performing lanes originated from central and western Canada. Outbound freight from Ontario and Quebec markets performed poorly, possibly due to the recent rise in outbreaks of COVID-19 across the two provinces.

The top performing domestic lanes with the largest percentage increase in load volumes were Manitoba to British Columbia (+68%), Saskatchewan to Alberta (+44%), and Manitoba to Ontario (+38%). Although Ontario and Quebec outbound markets were affected by increased cases of COVID-19, the inbound market of New Brunswick saw an average increase of 10 percent more freight. British Columbia and Alberta were most impacted by declining freight from Quebec, while Saskatchewan was most impacted by less freight from Ontario.

On a city-to-city level, of the lanes with sufficient posting volumes, over two-thirds saw a weekly improvement from the end of September to week one of October. The lanes with the largest improvements were Saskatoon to Calgary (+281%), Winnipeg to Regina (+130%) and Winnipeg to Thunder Bay (+117%). Some short haul lanes within Ontario and between Quebec saw growth despite rising cases of COVID-19 in these provinces, most likely due to the busy nature and sheer volumes of activities on Loadlink’s busiest corridor. Due to Quebec’s partial lockdown to avoid further spread of the novel coronavirus, the Greater Toronto Area, Ottawa, Winnipeg, and Calgary inbound markets were most affected by reduced freight from Quebec.