January load volumes were the highest in the past 11 months.

Since 2016, January load volumes have consistently outperformed the December preceding it. Interestingly, load volumes this past January were nearly identical to that of January 2017. The 2017 year saw lower volumes in the first quarter, but rose as American ELD mandates came into effect. Stabilizing cross-border trade from the new USMCA agreement and Canadian ELD mandates in 2021 may incur similar effects on volumes later this year, which could result in more loads and reduced truck availability. 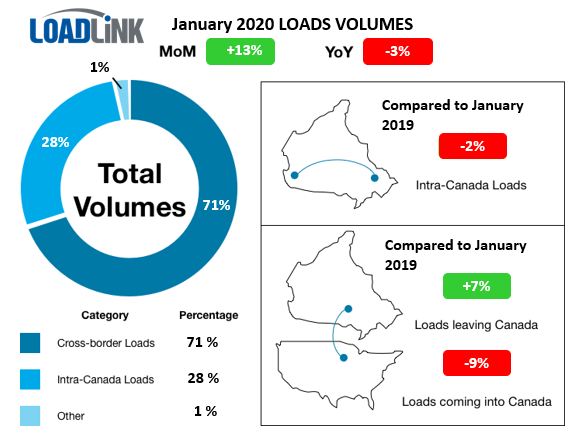 Overall, load volumes originating from all the United States saw increases month-over-month, but stand-out states included Illinois (+86%), Texas (+46%) and North Carolina (+132%). Ontario benefitted the most as there were nearly 50,000 (+70%) more loads destined for the province while Quebec received 20,000 (+83%) additional loads. Western Canada saw over 13,000 (+43%) more loads, with Texas contributing the most out of all the states.

Western Canada actually delivered three percent more loads to the US, but as a whole, outbound cross-border loads from Canada performed poorly. Loads destined to the states of Pennsylvania (-36%), Ohio (-42%), and Illinois (-37%) saw the largest volume loss in loads, while total loads originating from Ontario and Quebec fell 34 and 31 percent, respectively.

Despite the increase in total truck availability, the volume of cross-border trucks entering the U.S. saw a big decline of 27 percent. This could have been a result of the Federal Motor Carrier Safety Administration’s new Drug and Alcohol Clearinghouse that may have limited some carriers from potentially heading across the border.

TransCore’s Canadian Freight Index accurately measures trends in the truckload freight spot market. The components of the Freight Index are comprised from roughly 6,400 of Canada’s trucking companies and freight brokers. This data includes all domestic, cross-border, and interstate data submitted by Loadlink customers.

Looking for a better way to match available freight loads with trucks, TransCore Link Logistics developed Loadlink in 1990. Loadlink is a load board connecting brokers, carriers, owner operators and private fleets in Canada to a real-time database of 19 million loads, shipments, and trucks – the largest in the industry.