Prior to the holidays, December load volumes performed very well with numbers resembling those in July when capacity was at a healthier level. Declines in both truck and load availability were expected at the end of December. With three fewer shipping days compared to November, December’s load postings declined nine percent compared to the previous month; yet the daily average number of postings actually increased six percent.

In December, capacity tightened slightly to 2.82 from a competitive truck-to-load ratio of 3.20 in November. The year began with a very carrier-favoured ratio of approximately one truck for every one load posted on Loadlink. This ratio remained relatively stable until the second quarter of 2018 where capacity began expanding due to a recovery in truck volumes coupled with decreasing load availability. This expansion in capacity continued until October where it reached a peak of 3.22 for the year but has tightened since then.

2018’s initial tight capacity levels were due a combination of decreased driver availability following new ELD mandates and hours of service enforcement introduced in late 2017, as well as an immense uptick in load volumes. As equipment numbers recovered, load volumes declined. This may have been due to a decreased reliance on the spot market by shippers and brokers as they moved towards contract-work during a period when securing trucks was difficult.

Carriers were happy to settle outside the spot market as rates were already very enticing while shippers and brokers would have wanted to lock in rates before spot rates increased yet again, causing more contracts to be tendered. New tariffs and international trade uncertainties most likely contributed to the drastic drop in load postings mid-year. Year-over-year, the truck-to-load ratio expanded from 1.14 in December 2017 to 2.82 in December 2018.

Canadian van rates experienced steady growth entering into the year but stabilized during the summer season once capacity had returned to regular levels. The rate in December was eight percent higher than it was in December 2017. Cross-border van rates on Loadlink underwent greater growth throughout the year as the December rate was 17 percent higher year-over-year. Hard enforcement of ELD adoption in the USA along with new tariffs would have affected rates more severely compared to intra-Canadian rates. 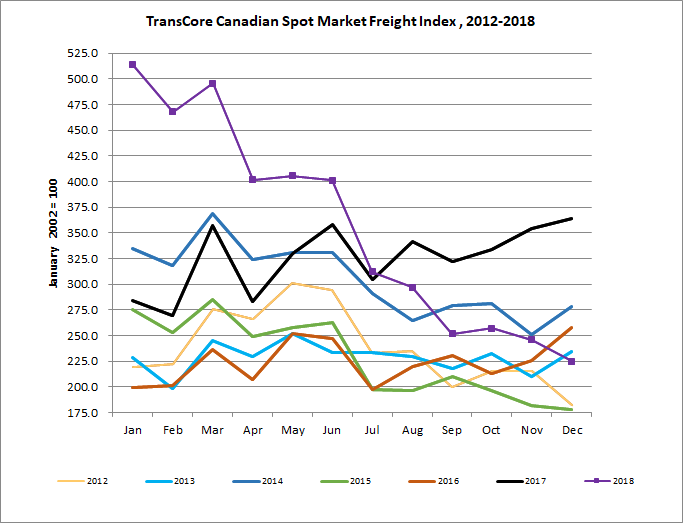 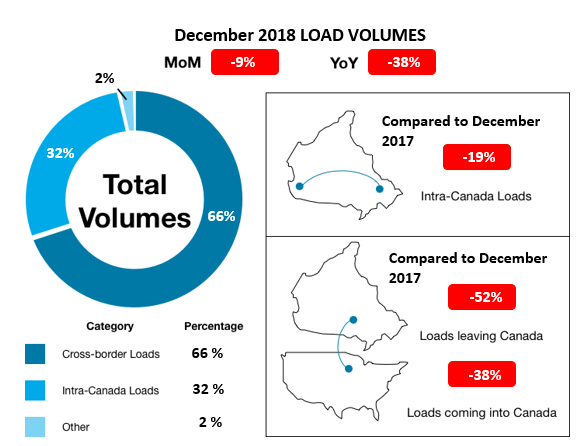 TransCore’s Canadian Freight Index accurately measures trends in the truckload freight spot market. The components of the Freight Index are comprised from roughly 6,300 of Canada’s trucking companies and freight brokers. This data includes all domestic, cross-border, and interstate data submitted by Loadlink customers.

Looking for a better way to match available freight loads with trucks, TransCore Link Logistics developed Loadlink in 1990. Loadlink is a load board connecting brokers, carriers, owner operators and private fleets in Canada to a real-time database of 18 million loads, shipments, and trucks – the largest in the industry.